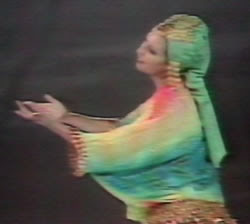 For those interested in the stylized classical Arabic dance form refered to here as The Muwashahat, Mahmoud Reda's sister-in-law recently posted on her website a short, excellent history of the Reda Troupe's pioneering work on the form. It is a stylized, reimagining dance form derived from the 10th century court music of Arab-Andulusia. Mohamed Shahin and Karim Nagy recently hosted an excellent introductory workshop on the topic in NYC. You'll hear more about that soon. In the meantime, who could introduce it better than Farida Fahmy? Visit immediately: "Muwashshahat Raqisah: Dancing Muwashshahat." (Both graphics come from Fahmy's site.) 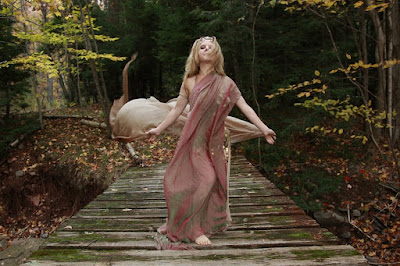 This evening includes a roster of dancers including Kaeshi, Tandava, Jaida, and me (Thalia) raising money for another successful performance. PURE's summer show emphasized the transformative potential of belly dance to enable women to accept their bodies and confront confidence issues. This show at Je'Bon is to raise money for a next performance. 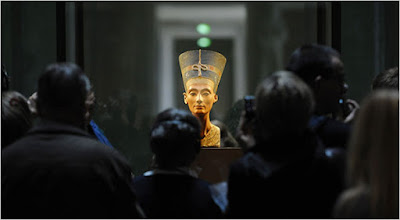 As the Neues Museum reopens in Berlin since its closure after World War II, a controversy has risen over the proper ownership of the priceless, 3,300 year old bust of Queen Nefertiti. Zahi Hawass claims the bust was taken in dishonestly in 1913. Germany claims the possession was legal and that the conditions in Germany make the relic better off there. Like last spring's Greece vs. England Elgin Marbles debate, the voiceless, stunning female beauty at the heart of the controversy and power mongering haunts. See the New York Times' article: "Egypt Demands Return of Nefertiti Statue."
at 6:05 PM No comments:

To Learn to Die is to Learn How to Live: "Egyptian Book of the Dead" 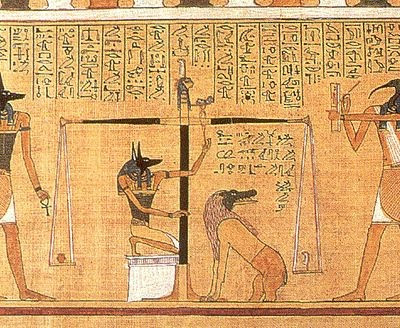 At a lecture on how die (and consequently live well) at the New School presented by philosophy superstar Critchley, the Egyptian Book of the Dead came up repeatedly. The human obsession with the afterlife by ancient Egyptians is not unique; humans at all intervals can't stand to believe their souls might simply end. But what intrigued me was Critchley's reference to Montaigne, the French philosopher and essayist, who was fascinated by how the Egyptians constantly put the inevitability of death in their midst. At feasts, during the revels and eating, a human skeleton would be brought out to remind revellers that the end was inescapable. The title of the funerary script "Spells of Coming" (or "Going") "Forth By Day" presents also the quandry that because we don't know our afterlife situation, we don't know if we are coming or going.

For a better print discussion on dying and Egyptians and philosophy, see the recent review in the Nation by Alexander Provan: "The End of Self Help." Simon Critchley was entertaining (he stands on his toes as he speaks) and the lecture was thought provoking rather than dark. His recent book is The Book of Dead Philosophers.
at 5:52 PM No comments:

While working on a new belly dance article, I found an a beautiful clip of Mahmoud Reda and Farida Fahmy on YouTube. Beautiful folkloric dancing from both the choreographer and his sister in-law.
at 6:08 PM No comments: 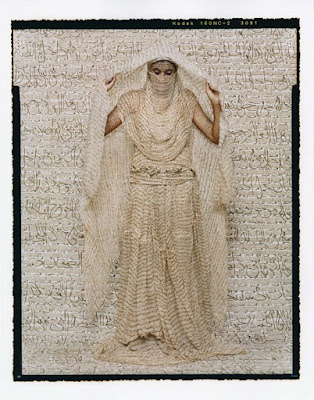 A new exhibit at the DeCordova Museum in Lincoln, MA (just north of Boston) opened this week. The New York based Saudi Arabian photographer Lalla Essaydi photographed women in poses and settings that suggest the famous "orientalist" painters such as Delacroix. The exhibit runs through January 3. A panel will be held on Sunday, Oct. 11. Check the website for detail exhibition information on "Lalla Essaydi: Les Femmes du Maroc." The Decordova Museum and Sculpture Park is worth visiting anytime. http://decordova.org/ .
at 6:00 PM No comments: 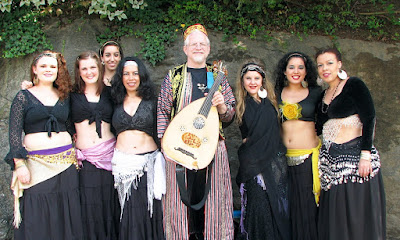 We had a beautiful day at Fort Tryon. The weather was perfect and tens of thousands of festival goers strolled by. The Sisters of Bast danced at 1:30 and 3 p.m. and everyone performed beautiful solos to the music of "Sir Scott Lancelot" aka Scott Wilson. Though the knight (pictured below) turned out to be a bit pompous, we left inspired for more shows.